The church of the Epiphany at 96 South 9th Street is for conversion, sale, or destruction. Please see the decree dated September 28, 2021, linked HERE. I am a bit confused which building was the rectory, as the house numbers do not seem to match on facing sides of the street. The 1922 Catholic Directory lists Epiphany School with 7 Sisters of St. Joseph, one lay teacher, and 352 students at 98 South 9th Street. On the Berry Street side of the property is Epiphany Park, possibly on land from a parish organization. See the description at NYC Parks.

The long-established parish of Sts. Peter and Paul has accomplished a remarkable makeover of a large building on Berry Street in Williamsburg. A lengthy explanatory article is linked HERE. I think the building once included the parish elementary school. Land values in Williamsburg have risen, and the parish earned the renovation cash by leasing other properties on the same square block.  Apparently, the parish never owned the entire block.

Please read also my previous post about this parish, taking care to note the helpful comments at the end of the post.

In June, 2021, an important article appeared on the St. John's University website, mainly describing the recent transference of the original 1869 cornerstone from Brooklyn to Queens.  The lengthy article also offered more news about the current construction.  Link Preserving History.

St. John's on Lewis Avenue is a property I have not explored, though it is important in the history of the diocese of Brooklyn. Today, the Commercial Observer disclosed the sale of what the buyers call 800 Willoughby Avenue. That is the north transept of the Church of  St. John the Baptist. For decades, the stained glass windows have been boarded up (against rock-tossing vandals), and I am told that a cinder-block bunker was installed in the vast nave as a chapel of worship. Two hundred four apartments will be built in the church. A gym and a two-story garage will be built. A 2013 video linked HERE gives a good idea of the areas outside the "box" with a few glimpses of the active and intimate worship chapel.

In the ten days since I first posted this I have not found any corroboration of the article in the Commercial Observer. There is a chance that the financial sources don't add up to the amount needed for the deal, or some other obstacle has blocked it. Edit 3.3.2021.

The article does not disclose how much of the church property has or will be bought. The greatest extent seems to be a half-block, with Lewis Avenue on the west end, Willoughby Avenue on the north, and Hart Street on the south. Two years ago (looking at Google Street View), the entrance was a gate on the north side of Hart Street. Now, the directions for weekday Mass instruct people to enter the Daily Mass chapel from Willoughby Avenue.

St. John's College was long here until it moved to Union Turnpike, Jamaica. Whether any property on either side of Lewis Avenue is owned by the Congregation of the Mission (Vincentian Fathers) is not explained. The article reads as if the seller is the parish of St. John the Baptist.

I may have to edit this report as I learn more.

I am posting this link on my Brooklyn blog because it attracts the most viewers and comments. My other blogs are BronxCatholic and Nassau County Catholic.

The archdiocese of Boston has helped genealogists in two ways: a new map of parish boundaries and a treasure of sacramental archives. Please see this Boston Pilot article for the two links. I hope more dioceses imitate the offering. 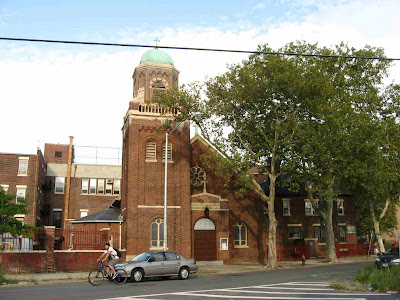 IMPORTANT NOTE: On December 8, 2020, Bishop Nicholas DiMarzio reopened Holy Family church in Greenpoint under an administrator from the Shalom Catholic Community, a group of Brazilian roots. Please see the article in the Brooklyn Tablet linked HERE.
----
This parish was established in 1905, and the cornerstone of the church above reads 1911. It seems that Slovak Franciscan Friars cared for the faithful here during the parish's early era.
---
When I took the above photo about 5:15 p.m. on a weekday in 2008, many cyclists seemed to be heading home on an established fast bike lane, unlike the worse traffic of parallel Manhattan Avenue.  The church is on North 15th Street at Nassau Avenue.
----
In 2011, the bishop of Brooklyn merged this parish with the parish of St. Anthony of Padua, which earlier had absorbed the parish of St. Alphonsus.  Since early 2015, it is San Damiano Mission.
--- 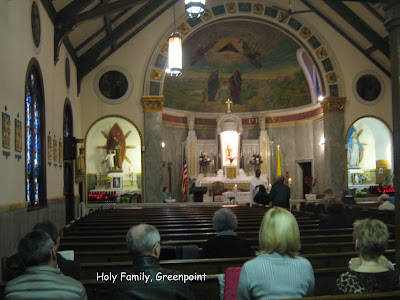 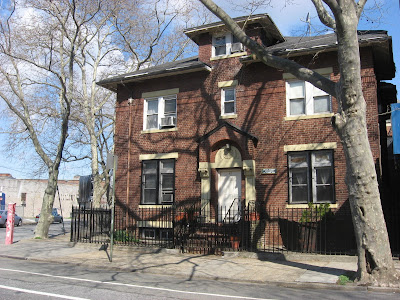 Above, the rectory at 21 Nassau Avenue. 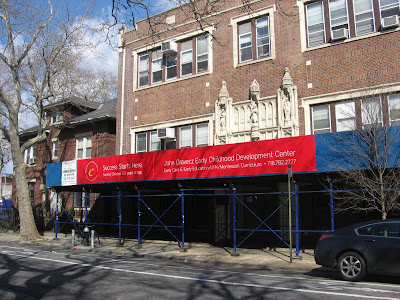 The parish school, which closed in 1970, is now a day care center operated by the diocesan Catholic Charities.
Posted by Joe __at 2:04 AM No comments:

It is easy for me to edit this blog. Please email corrections to cjmcmann(at)msn.com Thank you. Joe

Warning! School enrollment figures may be stale or otherwise inaccurate. It is difficult to find grade-by-grade numbers given with the date of the count.